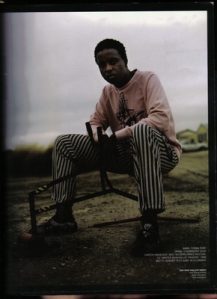 When Tony Chomba Mwangi Njanja landed in Australia in 2002, he was immediately shipped off to an unknown boarding school far away from the cities of Australia.

What followed was 6 years of Mwangi stumbling in the dark, spending close to $10,000 and trying everything from joining the pick up artist community to being an award winning stage and television actor to fit into a society that he felt rejected him.

He took all the lessons he learned from his various mishaps and started the blog he wishes he found when he first immigrated, the Displaced African (tDA). tDA has become a successful web based community where he shares his insights with the African immigrant community.

“When I first landed here in 2002, I really had no one to show me the way at all,” remembers Mwangi , “ and so far my journey has been a roller-coaster to say the least! I tried every crazy thing you can imagine from working out 3-4 times a day, putting myself thousands of dollars in credit card debt attending pick up workshops and buying online courses, starvation diets and living in a car, all to try and find my place in this country.”

“Eventually around December of 2007, I made the decision that I would try one more crazy thing!”

Leaving the secure job of nursing and opting to forever bear the taboo label of “college dropout” he decided to start up a blog without a proven audience or successful model to follow.

“Some people definitely thought I was wasting my time writing for Africans. I thought it was a risk worth taking to do something meaningful,” remarks Mwangi.

The multimedia site has a quickly growing community with more than 12,000 visitors to date and has resulted in things the author could only previously have dreamed of.

According to one reader, ” (The DisplacedAfrican.com) is a testament of why Web 2.0 couldn’t have come at a better time for us Africans.”

To see what the buzz is all about, visit his website.