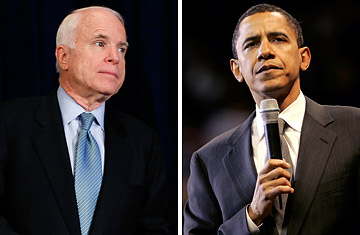 Well, Joe the Plumber seemed to be the main topic of discussion a day after the debates.  The media analyzed the number of time that McCain mentioned Joe the Plumber (I believe it was 22 times as opposed to Obama’s 2).

You can watch the debates on CNN’s page.   The debates amongst the people putting in their comments are almost more interesting than the actual debate.  I think that Obama explained more of his ideas better this time around and I wasn’t left feeling like I needed to ask as many questions.  Joe the Plumber was tracked down by Katie Couric and noted that he still was a little undecided and trying to make up his mind.  He was glad that he had helped stimulate the debate discussion, though.

The recurring comment I heard from people who called into radio stations to voice their opinions about the debates was that they either felt that Obama had made a stronger case for himself, finally, or that they had already made up their minds and were not influenced further by this last debate.  There were the occasional out-of-touch folks who called in to make that annoyingly stupid statement that people need to get off their lazy butts and get a job.

Hello, there are mass layoffs going on all over the country, with plenty more being planned.  How do you get a job when there are none being created, or when the only jobs you can get are the ones that don’t pay you enough to get healthcare (if it is offered at all), or when we exhaust our retirement money to pay daily living expenses as we desperately try to keep our heads above water.

People are not lazy layabouts looking for a handout.  Many are legitimately treading very treacherous waters with no real help forthcoming in a situation where stupid policies have set things in motion to destroy what was once a strong economy.

Let’s stop finger pointing and get to the business of healing the economy and building our nation back to what it used to be.